Eventually he transferred to the Unitarian Church ministry and became a renowned orator and prominent social activist for civil liberties and government accountability.

He was the minister of All Souls Unitarian Church in Washington DC from 1943-57 which gave him a powerful platform for influencing national issues. He was a prolific writer on religious and social topics, and many of his books are still available today.

He died in 1957 and three justices of the US Supreme Court attended his memorial service.

Born in 1904 and entered the ministry in 1927. The Ilford circuit (including this church) was his first appointment. Minister of Brunswick Methodist Church in Newcastle on Tyne (1944-53) and superintendent of the Dome Mission in Brighton (1953-67). A distinguished Methodist preacher.

Author of several books including ‘Highways in the Byways’, ‘The Master Enters’ and ‘News from the North’. He died in 1986.

Born in 1857 and entered the ministry in 1880. As a supernumerary, assigned to Warley barracks in 1928 as chaplain to the Essex Regiment, with responsibility for Billericay church in 1930.

Author of ‘The Church and the Children’ and of several hymns. He died in 1932.

Born in 1903 and entered the ministry in 1928. Served for one year only in the Ilford Circuit (including Billericay) then at Rilion, Jersey, Sirhowy Valley,
Bradford and Whitechapel. He died in 1981.

Entered the ministry in 1931 and the Ilford Circuit was his first appointment. Most of his ministry was spent in the south of England. He died in 1968.

Born in 1903 and entered the ministry in 1927. After Ilford, he served in South West England (Sherborne, Bodmin and Holsworthy) and Yorkshire before retiring in 1968. He died in 1976.

Born in Liverpool in 1871. Entered the ministry in 1896 and was active for 41 years, then as a supernumerary served as chaplain to the Essex Regiment at Warley barracks and as Billericay minister from 1937-1942. He died in 1949.

Born in 1878. Entered the ministry in 1904. In 1942, as an active supernumerary, assumed responsibility for Brentwood and Billericay churches, Warley barracks and RAF Hornchurch in the Ilford circuit. He died in 1957.

Born in 1917 into a distinguished Methodist family, many of whom were missionaries. Son of the Rev B A Hurd Barley. Entered the ministry and married Doris Cadman in 1947.
His appointment to the new Romford circuit was his first and he was the first minister to be resident here.

He was appointed the Head of Religious Education at the John Mansfield School, Peterborough in 1967, where he remained until 1980. He and his wife both died in 2007.

Entered the ministry in 1955. Prof Dunn-Wilson has served Methodism in Britain, Kenya, the Carribean & Americas.

Born in Kingham, Oxfordshire and attended Chipping Norton Grammar School. Trained at Didsbury College, Bristol, where he gained his BA.

Entered the ministry in 1962 and served in Canterbury, Mansfield, Nottingham, Billericay & Herongate, Fleet and Godalming. He retired in 2003.

Entered the ministry in 1960. Served as Billericay minister in 1994-5 whilst circuit superintendent and based at Basildon.

Born in 1954 and died whilst in service at Billericay in 1998. Appointments in Sierra Leone.

Widow of the Rev Tom Allen, whose appointments were in Boston, Doncaster, Folkestone, Bromley and Bishop’s Stortford. She entered the ministry after his death in 1991 and Billericay was her first appointment. Later moved to Brighton & Hove as circuit superintendent and retired to Essex in 2007.

Born in Staines, Middlesex and candidated for the Methodist ministry after some years in personal banking and finance. Served in County Durham and Billericay and resigned from the ministry in 2005.

Entered the Methodist ministry in 1994 as a deacon in the Peterborough circuit, after in-service training in south Norfolk and at Wesley House, Cambridge. He was ordained in 1996.

He transferred to the Presbyteral ministry and was ordained into that order in 2003, after his move to Billericay. Les and wife Di moved to Alston, Cumbria in 2008.

Brought up in Derbyshire and educated at Durham University, Judith entered the ministry in 1983. She served as a circuit minister at Leeds, Barnsley, Dearne Valley & Tunbridge Wells, then as a lecturer at the South East Institute for Theological Education.

She was a coordinating secretary for Churches Together in Britain & Ireland and then a director at the Housing Justice organisation. 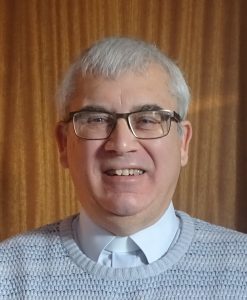 David Bagwell was brought up in Plymouth and then attended Bath University, training to be a middle school teacher. Having been called into the Methodist Ministry he studied at Wesley College, Bristol before taking up his first appointment in Southampton. He did further training for an MA in Evangelism Studies at Cliff College and served in Bracknell, Nailsea (near Bristol), and as superintendent minister in Camborne in Cornwall.

Over the years David was involved in the setting up of a number of new churches, and other ecumenical initiatives such as Street Pastors and Food Banks. He authored a number of books based on long distance walks, and a series of small group study guides on Christian discipleship and Celtic Spirituality.

Jesus said to her, I am the resurrection and the life. Whoever believes in me, though he die, yet shall he live, and everyone who lives and believes in me shall never die. Do you believe this? - John 11:25-26 ESV

An ongoing Prayer for Ukraine

God of peace and justice,
we pray for the people of Ukraine today.
We pray for peace and the laying down of weapons.
We pray for all those who fear for tomorrow,
that your spirit of comfort would draw near to them.
We pray for those with power over war and peace
for wisdom and discernment and compassion to guide their decisions.
Above all, we pray for all your precious children,
at risk and in fear, that you would hold and protect them.
We pray in the name of Jesus, the Prince of Peace. Amen.